History of the Friends of the Macon Dog Park


Reva Anne Dame had a little dog named Tyler whom she loved dearly. Her concern for Tyler's well-being led to her monetary donation that helped establish a dog park in Macon. At the time of the park's opening, her donation (in stock) was reported to be worth $76,000. This money was left in trust to the Historic Macon Foundation. The fund has paid for a new fence, some landscaping, the gazebo, a drinking fountain, and the kiosk.

The Friends contacted several Internet websites that list off-leash dog parks national wide. This has resulted in several visitors to the park who traveling with their dogs north and south on I-75. Visitors come from all over Georgia and occasionally from out-of-state. City Council president, Anita Ponder called the park a "destination" for Macon visitors. Fliers for the park were distributed at the Macon Visitor's Center.

The Friends gave a presentation to the Macon Kennel Club about the dog park and what we hoped it would do for the middle Georgia area. After contacting the Boy Scouts about the park as a service project, one scout volunteered to rebuild park benches. A student group from Mercer University volunteered to remove old concrete waste from the park site.

From 2004 through 2006, monthly meetings were held at the Historic Macon Foundation office to discuss how to enhance to the new park and promote it to the public. Macon Parks and Recreation officials participated in most of these meetings. Discussions included fencing off the creek to prevent dogs getting wet. The Friends recommended the creek as feature of the park.

The City of Macon's cable station, Channel 14, runs a promotional spot for the park taken from this website.

From Summer of 2004 to Spring of 2006 monthly volunteer clean-up days helped keep the park in good condition. These volunteer days were announced in the Friday Macon Telegraph in the weekend section.

The Friends kept a supply of doggie poo bags in the park from summer of 2004 until fall of 2006.

A Cafe Press web store was setup with souvenirs of the Macon Dog Park.
http://www.cafepress.com/MaconDogPark

May 2005
Yard Sale at the park
Canine good citizenship training

December 2006
asked for volunteers to maintain watch at the park 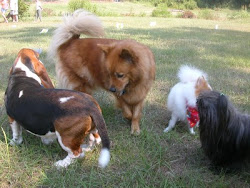 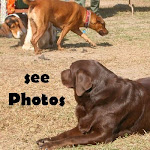